The Guardian has reported that Chicago Police are operating a secret detention facility that mirrors the CIA’s “black sites.” From violations of due process to torture, the revelations raise serious concerns about the deteriorating state of freedom and justice in the United States.

Suspects are taken to the facility without being booked or processed. They are interrogated without lawyers present and in fact, lawyers are often refused entry. Those who have gained access to clients claim that police still withhold information about the suspects.The detainees are not read Miranda rights or offered due process.

Brian Jacob Church, who was acquitted of terrorism charges at the 2012 NATO summit but convicted of others (and served over two years in prison), said

“Essentially, I wasn’t allowed to make any contact with anybody…I had essentially figured, ‘All right, well, they disappeared us and so we’re probably never going to see the light of day again.’”

Just like CIA black sites, there have been multiple instances of violence during interrogations. In one case in February of 2013, 44-year-old John Hubbard was pronounced dead after authorities at Homan said he was found “unresponsive” in an interview cell. There is no record of why he was there in the first place.

It is also scary that according to Church, the facility is populated with MRAPs, or armored vehicles used as weapons of war. 1,700 pieces of military equipment were granted to Cook County as part of the highly contested Pentagon program to militarize domestic police.

All of these actions resemble those made possible by the “Belligerent Act” language passed in the 2012 National Defense Authorization Act (NDAA). These provisions essentially remove due process and allow the government to indefinitely detain Americans without charge or trial, and are still in effect today.

Do you think police departments need grenade launchers? Since 2006 through the Pentagon’s 1033 program, police have obtained 205 grenade launchers, 79,288 assault rifles, 422 helicopters, 50 airplanes, 600 tanks, and more than $3.6 million worth of used military gear.

Whats most interesting is that the military gear these police departments are acquiring, such as the grenade launchers and armored vehicles, must be used within one year or else the equipment will be transferred elsewhere.

Giving Grenade Launchers to Campus Police: The Pentagon’s 1033 program, which allows the Defense Department to unload its excess military equipment onto local police forces, has quietly overflowed onto college campuses. According to documents obtained by the website Muckrock, more than 100 campus police forces have received military materials from the Pentagon. Schools that participate in the program range from liberal arts to community colleges to the entire University of Texas system. Emory, Rice, Purdue, and the University of California, Berkeley, are all on the list.

Colleges can also apply for Homeland Security grants, the same ones made available to every municipal police department in the country after 9/11. In 2012, UC Berkeley tried to use the program to purchase an eight-ton armored truck

Reports have shown that over $4 billion worth of military equipment has been transferred from the pentagon to local police departments in recent years, with the 1033 program being just one of many government efforts to supply police with heavy ammunition.

The 1033 program was one of the many aspects of the National Defense Authorization Act (NDAA), which has been said to establish conditions comparable to martial law.

How did it ever come down to abandoning peace keeping and accepting law enforcement by any means? Even the New York Times expresses alarm in, When the Police Go Military.

“The Posse Comitatus Act of 1878 generally bars the military from law enforcement activities within the United States. But today, some local and city police forces have rendered the law rather moot. They have tanks – yes, tanks, often from military surplus, for use in hostage situations or drug raids – not to mention the sort of equipment and training one would need to deter a Mumbai-style guerrilla assault.”

World Net Daily offers a sad chronicle in the essay, The growing militarization of U.S. police.

“The SWAT concept was popularized by Los Angeles Police Chief Darryl Gates in the late 1960s in response to large-scale incidents for which the police were ill-prepared. But the use of SWAT teams has since exploded. Massive SWAT raids using military-style equipment are becoming routine methods for executing search warrants. One study estimates 50,000 such raids per year nationwide

John W. Whitehead that “it appears to have less to do with increases in violent crime and more to do with law enforcement bureaucracy and a police state mentality.”

One of the “so called” unintended consequences of the Iraq and Afghanistan wars is the intentional indoctrination of troops into the culture of excessive force, citizen combatant threats and indiscriminate brutality. The suppression of common law natural rights is the ultimate causality of this deranged and profane mind control.

“To Protect and Serve” is now an euphemism for breaking heads. Police Thugs Claim They’re Here to “Serve” wants you to believe that “police are basically the same all over the world: they describe their role of carrying out the force and coercion required by those wanting to control others as being a role of “serving the people.” Those who are at the receiving end of the force and coercion are usually submissive and question nothing. 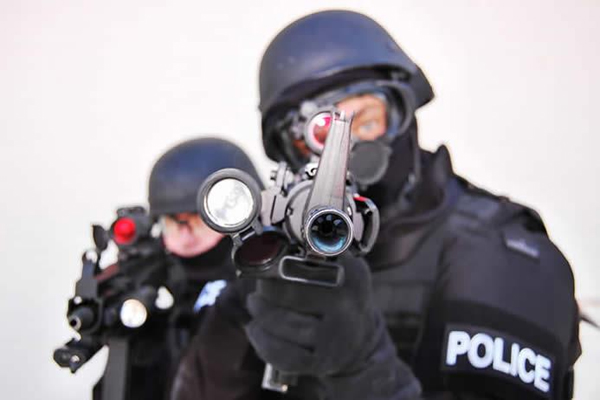 SWAT teams are raiding poker games and trying to stop underage drinking? Overwhelming paramilitary force is on the rise.

Excerptes from “Rise of the Warrior Cop: The Militarization of America’s Police Forces”

Sal Culosi is dead because he bet on a football game — but it wasn’t a bookie or a loan shark who killed him. His local government killed him, ostensibly to protect him from his gambling habit.
Several months earlier at a local bar, Fairfax County, Virginia, detective David Baucum overheard the thirty-eight-year-old optometrist and some friends wagering on a college football game. “To Sal, betting a few bills on the Redskins was a stress reliever, done among friends,” a friend of Culosi’s told me shortly after his death. “None of us single, successful professionals ever thought that betting fifty bucks or so on the Virginia–Virginia Tech football game was a crime worthy of investigation.” Baucum apparently did. After overhearing the men wagering, Baucum befriended Culosi as a cover to begin investigating him. During the next several months, he talked Culosi into raising the stakes of what Culosi thought were just more fun wagers between friends to make watching sports more interesting. Eventually Culosi and Baucum bet more than $2,000 in a single day. Under Virginia law, that was enough for police to charge Culosi with running a gambling operation. And that’s when they brought in the SWAT team.

On the night of January 24, 2006, Baucum called Culosi and arranged a time to drop by to collect his winnings. When Culosi, barefoot and clad in a T-shirt and jeans, stepped out of his house to meet the man he thought was a friend, the SWAT team began to move in. Seconds later, Det. Deval Bullock, who had been on duty since 4:00 AM and hadn’t slept in seventeen hours, fired a bullet that pierced Culosi’s heart.

Sal Culosi’s last words were to Baucum, the cop he thought was a friend: “Dude, what are you doing?”

The raid on Sal Culosi was merely another red flag indicating yet more SWAT team mission creep in America. It wasn’t even the first time a Virginia SWAT team had killed someone during a gambling raid. In 1998 a SWAT team in Virginia Beach shot and killed security guard Edward C. Reed during a 3:00 AM raid on a private club suspected of facilitating gambling.

Police said they approached the tinted car where Reed was working security, knocked, and identified themselves, then shot Reed when he refused to drop his handgun. Reed’s family insisted the police story was unlikely. Reed had no criminal record. Why would he knowingly point his gun at a heavily armed police team? More likely, they said, Reed mistakenly believed the raiding officers were there to do harm, particularly given that the club had been robbed not long before the raid.

Statements by the police themselves seem to back that account. According to officers at the scene, Reed’s last words were, “Why did you shoot me? I was reading a book.”

In the fall of 2010, police in New Haven, Connecticut, sent a SWAT team to a local bar to investigate reports of underage drinking. Patrons were lined up at gunpoint while cops confiscated cell phones and checked IDs. There have been similar underage drinking SWAT raids on college fraternities. Federal appeals courts have upheld these “administrative searches” even when it seems obvious that the real intent was to look for criminal activity as long as the government can plausibly claim that the primary purpose of the search was regulatory.
But the Fourth Amendment requires that searches be “reasonable.” If using a SWAT team to make sure a bar isn’t serving nineteen-year-olds is a reasonable use of force, it’s hard to imagine what wouldn’t be. 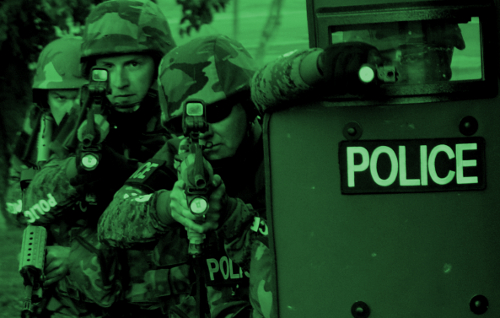 Want to make money on the drug war? Start a company that builds military equipment, then sell that gear to local police departments. Thanks to the generation-long trend toward more militarized police forces, there’s now massive and growing market for private companies to outfit your neighborhood cops with gear that’s more appropriate for a battlefield.

Some of this is decades-old news. For over 25 years, the Pentagon has been supplying surplus military equipment to police agencies across the country, largely in the name of fighting the drug war.

It was in 1987 that Washington really formalized the practice, with a law instructing the Secretary of Defense and the U.S. Attorney General to notify local law enforcement agencies each year about what surplus gear was available. The law established an office in the Pentagon specifically to facilitate such transfers, and Congress even set up an 800 number that sheriffs and police chiefs could call to inquire about the stuff they could get.
Ten years later, Congress passed the National Defense Authorization Security Act of 1997, a portion of which created what is now known as the 1033 Program. In that bill, Congress created the Law Enforcement Support Program, an agency headquartered in Ft. Belvoir, Virginia whose sole task is to make it easier for Pentagon supplies to find their way to local police stations.

The increasing role of the National Guard in the drug war also benefits military contractors. The National Guard straddles the gap between a police force and a military force. Over the years, Congress, state legislatures, and state governors have increasingly asked the Guard to take on the role of a domestic anti-drug agency, but to approach the job as the military might. (an open violation of The Posse comitatus Act)

The next major wave of militarization came after the creation of the Department of Homeland Security after the September 11, 2001 terrorist attacks. In the decade since, DHS has handed out billions in homeland security grants with a program far larger and better funded than even the Pentagon giveaway.
But most the most troubling thing about the DHS grant program is that it has given birth to the police-industrial complex. As the CIR reported in 2011, military contractors now market directly to police agencies with messages that encourage the mindset that the military and the police are fighting the same battle

The development of a Fascist Police State is happening right before our eye’s. Will we ignore it(E.G Nazi Germany 1930’s) or will we use the information at our disposal, to defeat theses plans?