The future of police technology has arrived, and it’s stranger and more terrifying than we could’ve possibly imagined.

Conspiracy theorists’ worst fears were confirmed last month when the New York Post reported that the NYPD now maintains an undisclosed number of unmarked, military-grade vans with X-ray radiation, capable of scanning the public and looking through building and vehicle walls.

This technology, called the “Z Backscatter” van, was used by the military in Afghanistan and costs somewhere between $729,000 and $825,000.
However, there’s no way we can know for sure what these futuristic vans are capable of, including potential health impacts due to radiation exposure, because the NYPD refuses to talk about them. The NYPD’s insistence on complete, blanketing secrecy is part of a growing trend within the surveillance state that civil rights advocates have been fighting for decades. 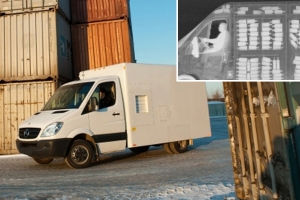 The Backscatter vans are only the beginning. Police departments around the nation have deployed a whole host of new devices, from laser light guns to facial recognition scanners. Here’s what’s being used by police right now: 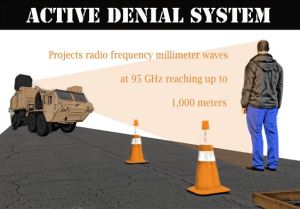 What began in the early days of the Bush Administration as a way to quell Iraq war-era uprisings could soon end up at local police departments.
The pain ray cannon, or “Active Denial System,” (ADS) as the police call it, is the latest form of military-grade crowd control. The weapon uses microwave beams to heat up the water and fat molecules in a person’s skin, effectively heating the person up until they run away.

Though “less-than-lethal,” its effects are anything but enjoyable. According to people who have had the pain ray tested on them, “it feels like someone opened an invisible door to a blast furnace in front of them, or that their skin was being scorched all over instantly. During protest situations, an ADS could be swept across large groups of people at a closer range than originally intended. The systems could be used to deter a crowd from a single area or to incapacitate drivers. If left unchecked, the pain ray cannon could allow for some pretty repulsive human rights violations. 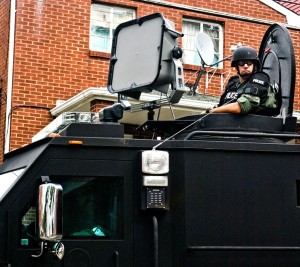 Instead of tear gas and batons, departments have taken to using Long Range Acoustic Devices (LRADs), to transmit a super-loud high-pitched scream into crowds. The sound is literally too painful to be around and is intended to “shape the behavior of potential threats”
Police Departments from New York City to Toronto to Ferguson, Missouri are using LRADs indiscriminately on protesters, causing excruciating pain to anyone within range.

This is not a precision tool,” said Gideon Oliver, a lawyers who wrote to NYPD Commissioner Bratton. “This is an area-of-effect weapon. When the police use it, it’s not as if they’re just targeting one person. It’s indiscriminate like teargas.” 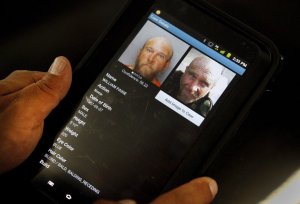 With secrecy and deception clouding any conversation about the militarized surveillance state, we can only assume that we are being recorded almost all the time, at least in urban areas. The market has more than tripled since 2008, with cameras being used more invasively every day.

Just last year the Boston Police Department was caught testing out its facial recognition technology on attendees of Boston Calling music festival without their knowledge. Data on each individual’s build, clothes and skin color was captured on thousands of people.

The ACLU claims police departments are also attempting to gain access to private security cameras in order to expand their surveillance reach without having to install new cameras of their own.

Even more aggressive than thousands of surveillance cameras on every street corner is police reconnaissance from the sky. Several police departments have deployed aircrafts with high-resolution cameras and software that can identify and track people over long distances. FBI versions of these planes include technology that may be able to capture private data from cellphones as they track someone, according to the Associated Press.

Concerns have been raised regarding use of this technology for police surveillance, including protection from “unreasonable search and seizure.” The U.S. Department of Justice released its own guidelines on the matter in May, barring federal law enforcement agencies from using drones to “monitor activity protected by the First Amendment”, such as peaceful protests.