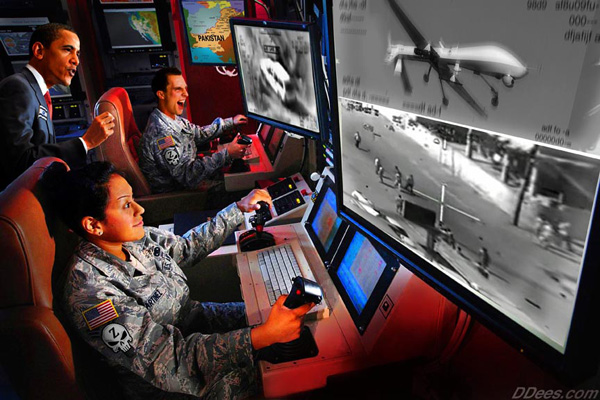 Recent Pentagon directives contain some alarming text regarding the extents of military involvement in domestic emergencies and the advancement of the War on Terror on domestic soil. Specifically at issue is the use of drone surveillance and military force against American civilians within the United States of America. Listed on the Pentagon’s website, DoD Directive 3025.18: Defense Support of Civil Authorities (DSCA) seems to enhance the circumstances in which the military may be deployed for situations inside domestic U.S. territory.

A Loophole for initiating martial law

The recent Pentagon directive seems to creep into new territory — that military force may be applied without civilian introduction.
Federal military commanders are provided EMERGENCY AUTHORITY under this Directive. Federal military forces shall not be used to quell civil disturbances unless specifically authorized by the President in accordance with applicable law (e.g., chapter 15 of Reference (d)) or permitted under emergency authority, as described below
(2) When duly constituted Federal, State, or local authorities are unable or decline to provide adequate protection for Federal property or Federal governmental functions. Federal action, including the use of Federal military forces, is authorized when necessary to protect the Federal property or functions.

This section is not a restatement of previously established law,The directive gives “federal military commanders” a loophole to assume presidential authority to deploy troops. The document does not attempt to define what circumstances would be so severe that presidential authorization becomes “impossible” to obtain. The law already establishes a chain-of-authority so that executive power is contiguous, even in the event of a president’s death.

The language seems to leave it up to the interpretation of the federal military commanders to decide if presidential authorization is impossible. If an “emergency” arises and a commander and is unable to contact the president, the Pentagon’s directive seems to allow the deployment of troops without civilian input. This would be a break from centuries-old doctrine that keeps the military under civilian control.

Fighting the War on Terror at home

Directive 3025.18 further states that military surveillance drones — called unmanned aircraft systems (UAS) — may be deployed for domestic purposes with the express approval of the Secretary of Defense.
A supplementary instruction document from the Pentagon lays out the conditions for the military to operate on American streets while fighting the War on Terror.

In a section titled “DOMESTIC TERRORIST INCIDENT SUPPORT,” the Pentagon document states that “the Secretary of Defense may authorize the use of DoD personnel in support of civilian law enforcement officials during a domestic terrorism incident.”