Are large segments of the American public literally walking around in a hypnotic trance?

Michael Snyder, of The American Dream, wrote this almost two years ago:

A general sense of apathy is spreading through the populace like a cancer and it begs the question: even if we wanted to “wake up,” could we? According to last year’s Nielsen report, the average American over the age of two years old watches more than 34 hours of television per week, plus at least three more hours of taped programming. The report also noted that the amount of time we spend watching television increases as we get older.

Back in 1969, a man named Herbert Krugman conducted a series of experiments regarding the effect of television on a person’s brainwaves. What he found was pretty startling:

Research‘television’ and ‘low vibrational energy’ into a search engine, and it’ll quickly return the fact that watching a lot of TV is like undressing your mind and submerging it into a bath of negative energy. TV effectively numbs the left side of your brain and renders you helpless to your right brain which is incapable of decoding and critically analyzing the information being presented to you.
Thus, watching countless hours of TV is putting people into a hypnotic state that author Wes Moore says, “produces highly functional, mobile ‘bio-survival robots.’” There’s a reason he dubbed television an “opiate of the masses 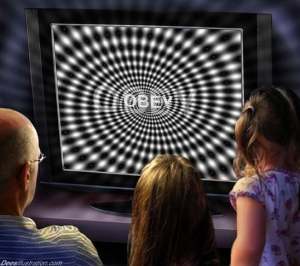 Some of Krugman’s more interesting conclusions from his 1969 TV brainwave research include:

.“Internal Alpha responses can be stimulated by appropriate external rhythms or frequencies

. “The time may come when the mass media may create special programs to help people modify certain attitudes or behavior.”

Your brain on TV, ladies and gentlemen. It’s a basic form of mind control.