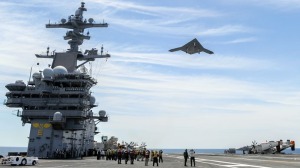 The Military Industrial War machine and the Those behind the world power structure will seize and take advantage of any Technology it can use to further it’s purpose(namely War and world domination). So it comes as no surprise that once personal weapons were 3d printed, that they would immediately be discredited and calls for them to be made illegal. The potential possibilities of this technology to produce much more for the human race, than just weapons of war, is what truly makes them a threat to the oligarchs and technocrats.

The first wave of tomorrow’s wars may begin with a printout.
When U.S. Navy ships need to resupply ammunition and other essential equipment, they have to pull into port. But could the advent of 3-D printers cut out the middleman, allowing the military to literally print out weapons and other supplies.

The idea isn’t as far-fetched as it might sound. After all, a college student recently made international headlines with his 3-D printer gun schematic. And just last week, NASA announced it had given a grant to a company working on a 3-D food printer. For its part, NASA has been at the forefront of 3-D printing, producing “mission ready” parts with the technology and even showing how 3-D printers can work in space.

As Extreme Tech’s Graham Templeton writes, 3-D printing presents some other fascinating future concepts of how military technology is used, and then potentially reused. “In terms of military efficiency, I think the next great step in automating war will be recycling. Will future soldiers be collecting their spent casings, not to protect the locals or the environment, but to be broken down and reused later?