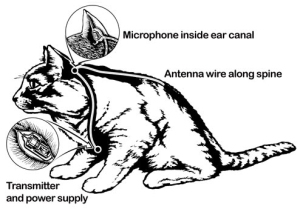 History’s earliest animal cyborgs? In the 1960s the CIA implanted cats with technological devices to turn them into living surveillance machines.

In an hour-long procedure, a veterinary surgeon implanted a microphone into the furry feline’s ear canal and a small radio transmitter at the base of her skull, and weaving a thin wire antenna into her long gray-and-white fur. This was top-secret Operation Acoustic Kitty. The leaders of the project hoped that by training the feline to go sit near foreign officials, they could eavesdrop on private conversations.

The problem was that cats are not especially trainable, and the program was abandoned; as a heavily redacted CIA memo from the time delicately phrased it, “Our final examination of trained cats…convinced us that the program would not lend itself in a practical sense to our highly specialized needs.”

Operation Acoustic Kitty, misadventure though it was, was a visionary idea just fifty years before its time. Today, once again, the U.S. government is looking to animal- machine hybrids to safeguard the country and its citizens. In 2006, for example, DARPA zeroed in on insects, asking the nation’s scientists to submit “innovative proposals to develop technology to create insect-cyborgs.”

It was not your everyday government request, but it was an utterly serious one. For years, the U.S. military has been hoping to develop “micro air vehicles”—ultrasmall flying robots capable of performing surveillance in dangerous territory.